Like fine wines, oysters take on the qualities of the environment in which they’re raised. Water temperature, salinity, season, the geology of the watershed, currents, tides, and growing methods work together to produce oysters that are unique to each of Maine’s farms.

While no two varieties are identical, there are some common threads that make Maine oysters a shuck above the rest. With nearly 3,500 miles of pristine, rugged coastline, Maine is the perfect place to cultivate and harvest the best oysters on Earth. Our cold, salty ocean water is rich in nutrients that oysters love, giving Maine oysters a crisp and briny, yet buttery and sweet flavor.

Maine oyster farmers are dedicated to their craft, and work hard to deliver exceptional products to their customers. Their commitment to sustainability and conservation of their local rivers and watersheds makes them incredible stewards of our coastline, our state, and our planet.

The coast of Maine comprises four distinct regions. Starting at the southern border of the state and moving east along the coast, we have the Maine Beaches, Greater Portland & Casco Bay, the MidCoast & Islands, and DownEast & Acadia. Within Maine’s coastal regions, the Trail invites you to explore noteworthy oyster hot spots which are particularly rich with oyster activity.

The Maine Beaches region is the coastal entry point of our state, stretching from Kittery to Old Orchard Beach. This region is home to raw bars that offer premium Maine oysters and an elevated dining experience. Sit back, slurp some oysters, and take in magnificent views of Maine’s tranquil southern beaches.

Explore our famed foodie city & the farms right in its backyard

Come to Portland for the world-class restaurants, stay for the oyster farm tours. Casco Bay is home to an impressive number of oyster farms – the coastal towns of Cape Elizabeth, Yarmouth, and Freeport are all close to Portland and offer immersive oyster experiences that go beyond the dinner table.

Take a road trip along the coast & discover an oyster wonderland

Maine’s MidCoast & Islands region is the birthplace of oyster farming in Maine. In this part of the state you’ll discover salty fishing villages, a little-known yet spectacular food and arts scene, and an abundance of oysters. From Brunswick to Damariscotta, to Rockland and the islands, the MidCoast offers endless excursions for any oyster lover.

DownEast & Acadia is the easternmost region in the state, extending to the border of Canada. While exploring this region’s iconic bold and rocky coast, let the Trail be your guide to living like a local. Hop aboard an oyster farm tour and take in stunning views of Acadia National Park and the surrounding islands. This region’s friendly neighborhood oyster farmers are some of the best tour guides around. 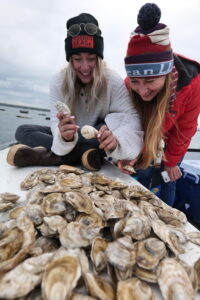 Oysters are one of the most sustainable forms of protein on the planet. Like other popular shellfish (clams, scallops, and mussels) oysters are bivalves – meaning their meats are enclosed within two shells that are hinged together. Bivalves require no fresh water, land, or feed to grow, as they feast on phytoplankton (algae) that is naturally present in the sea. Oysters perform important ecosystem services including nutrient cycling, providing habitat for other species, and carbon storage. The presence of oyster farms also helps improve water clarity, which helps other marine life grow and thrive.

Maine oysters are typically farmed along the ocean floor, or suspended along the surface of the water in floating bags or cages. While Maine oysters are delicious year-round, their peak season is during months ending in “r,” as the oysters fatten up and become very sweet and plump before winter hibernation.

Maine is home to over 150 individual family-owned oyster farms that provide good jobs for local people. Our state’s coastal economy is also supported by oyster farmers, who use boat yards, docks and marinas, gear manufacturers, seafood distributors, and other marine businesses which are the backbone of our working waterfront.

Oysters play an important role in Maine’s local food economy as well, with many of the oysters raised in our state enjoyed both in local households and served in restaurants. Many of Maine’s celebrated restaurants who pioneered the farm-to-table movement strive to source oysters from local Maine farms.

A Brief History of Maine Oysters 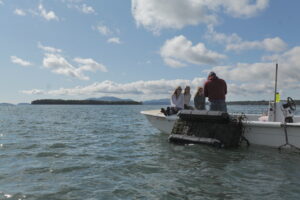 The American oyster, Crassostrea virginica, is native to Maine. Oysters have played an important role in Maine’s local food system since well before Maine was incorporated as a state. The presence of oyster shell middens (archaeological mounds of discarded oyster shells) along the Damariscotta river reveal that Native Americans discovered wild oysters over 2,000 years ago. Today, a portion of the original middens remain, which can be visited via public trails operated by the Maine Bureau of Parks and Lands in cooperation with Coastal Rivers.

The cultivation of oysters began in Maine as early as 1851, when the first known oyster farms along the Damariscotta River were established. Oyster farming in Maine started to grow and flourish in the 1970s, when pioneering companies in Blue Hill and on the Damariscotta River started using floating rafts to grow oysters on the water’s surface. Today, Maine is home to over 150 individual oyster farms which collectively produce over 3 million oysters annually.